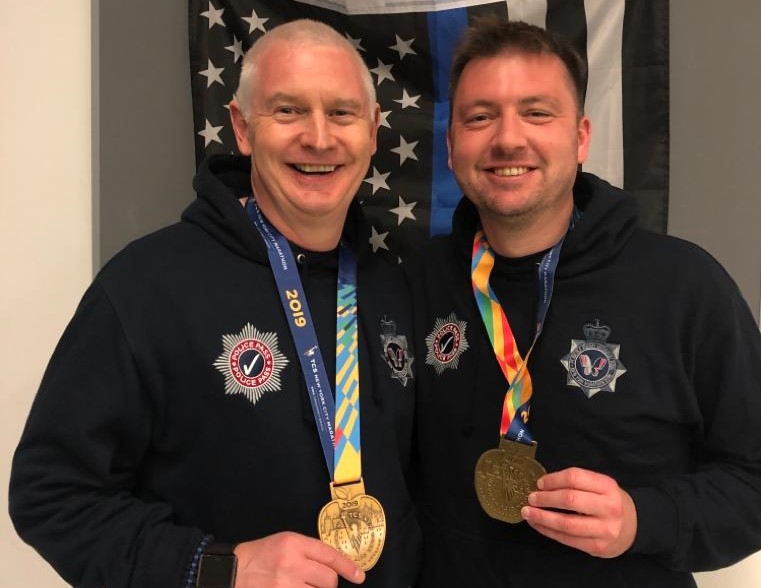 Fed Rep Stuart Cowan knew the size of the challenge he faced when he signed up to run the New York Marathon for the PC Nicola Hughes Memorial Fund. However, he didn't expect to end up on crutches.

Stuart has written about the experience, which was a rollercoaster to say the least:

It all started at 3:30am when the hotel fire alarm went off and they requested that the place be evacuated; not ideal preparation when I was due to wake up at 4:15am to get ready for meeting the other runners for the charity.

As I made my way to their accommodation, I had an utterly surreal moment walking through the streets of New York at 4:45am, trying to gather my thoughts and prepare myself for the day ahead.

It was comforting meeting the others that morning and it quickly becoming apparent that I wasn't the only one feeling the nerves and excitement in equal measures! Bryn Hughes, who had done so much at this stage as it was, had arranged for us to travel to the starting point in style: alongside NYPD runners and being transported in their police wagons!

I talk a lot about experiences and memories of that day but boarding the police wagons (like we all see in the movies) and taking that journey in convoy out to Staten Island led by police motorbikes is something that will live long in the memory.

We arrived at Staten Island where NYPD/FDNY played host to us again and welcomed us into their warm-up tents where we could stretch out and get some pre-race fuel into the system. Looking around the tent it was clear that everyone was the same; clock watching and desperate to make their way towards the starting area in anticipation.

Around 9:15am and just under two hours until my allocated start time I was given the signal to make my way to the holding areas at the start. Walking into that was yet another surreal moment, NYPD helicopters circling above us, strangers wishing me well - it was beginning to feel very real!

I made my way to the starting pen and I was lucky enough to be joined by some friendly faces from the charity. There were plenty of selfies and rubbish jokes being told to try and help settle the nerves! Before I knew it, the countdown was on and it was my time to go as the starting canon erupted. Tens of thousands of people alongside me took their first steps in the world's most iconic marathon. The feeling was unbelievable.

The first mile took me over Verrazzano Narrows Bridge giving the most unbelievable views of the New York Harbour and skyline. My race started great, I felt comfortable and all my training techniques and tips were proving beneficial but as I passed mile six it all started going wrong. I could feel my right knee become painful. It got progressively worse and by mile ten it was gone completely. The pain was unbelievable.

Safe to say it's no exaggeration that I had to complete the remaining 16.2 miles on one leg. The physical and mental challenge was at the toughest point I have ever known. 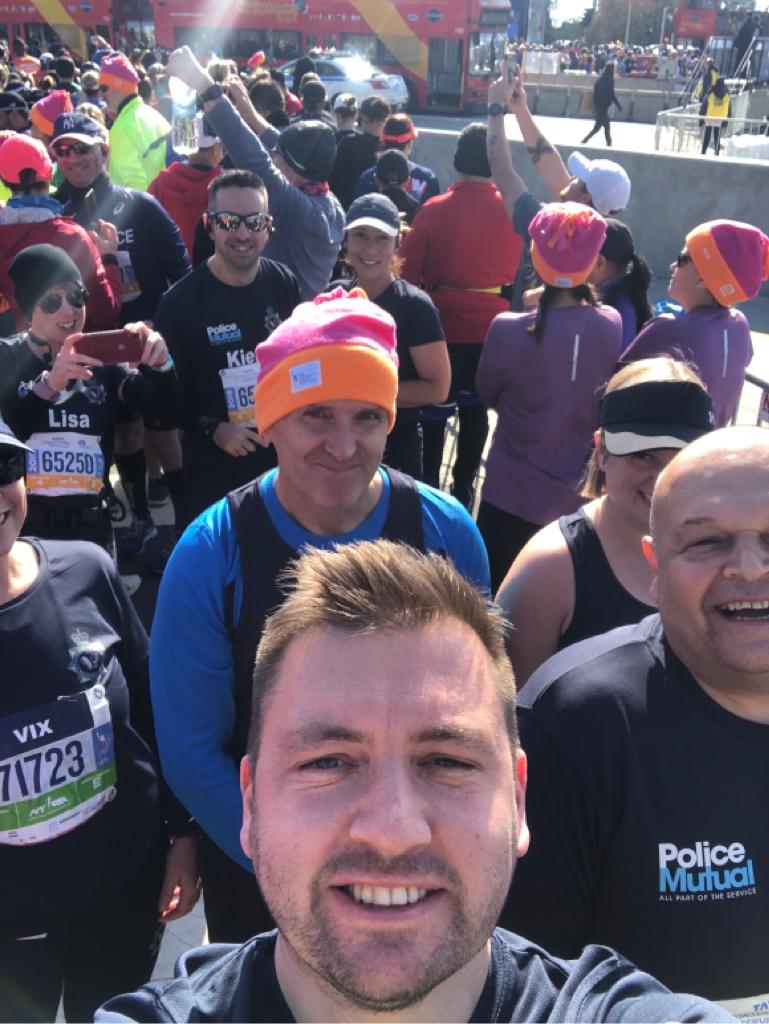 It will sound silly to some, but despite being surrounded by thousands of runners and the streets literally paved with well-wishers the whole way around, when you are suffering with an injury like that it really can feel like the loneliest place in the world.

Wanting to stop had crossed my mind on a few occasions but I kept reminding myself just why I was "running" this - for those who can't and to raise money for kids. There was no way that I could stop. I knew that every step was making the injury worse but quitting just wasn't an option.

I was also helped by seeing some friendly faces; my wife Amanda and families of other runners from the charity were waiting at mile 16 to cheer us on. I don't think we could print exactly what condition I told Amanda my knee was in, but you can all hazard a guess!

The rest of the marathon continued in the same vein, the aim to get through it and get finished was all I wanted, with any thoughts of a decent time out my head. I really struggled for the last couple of miles, but I saw the same friendly faces at mile 25 on the approach to Central Park which gave me that boost that I needed to keep going.

After 5 hours, 56 minutes and 4 seconds my marathon was finally over. Far longer than I would have wanted, but I was so proud I was able to complete it in the state I was in.

The experience wasn't over yet, as we were taken back from Central Park and through 5th Avenue in an FDNY truck with the sirens on back to the NYPD college where we given some food and much needed cold beer! The red carpet being laid on for us from NYPD and FDNY was something that I'll never forget. 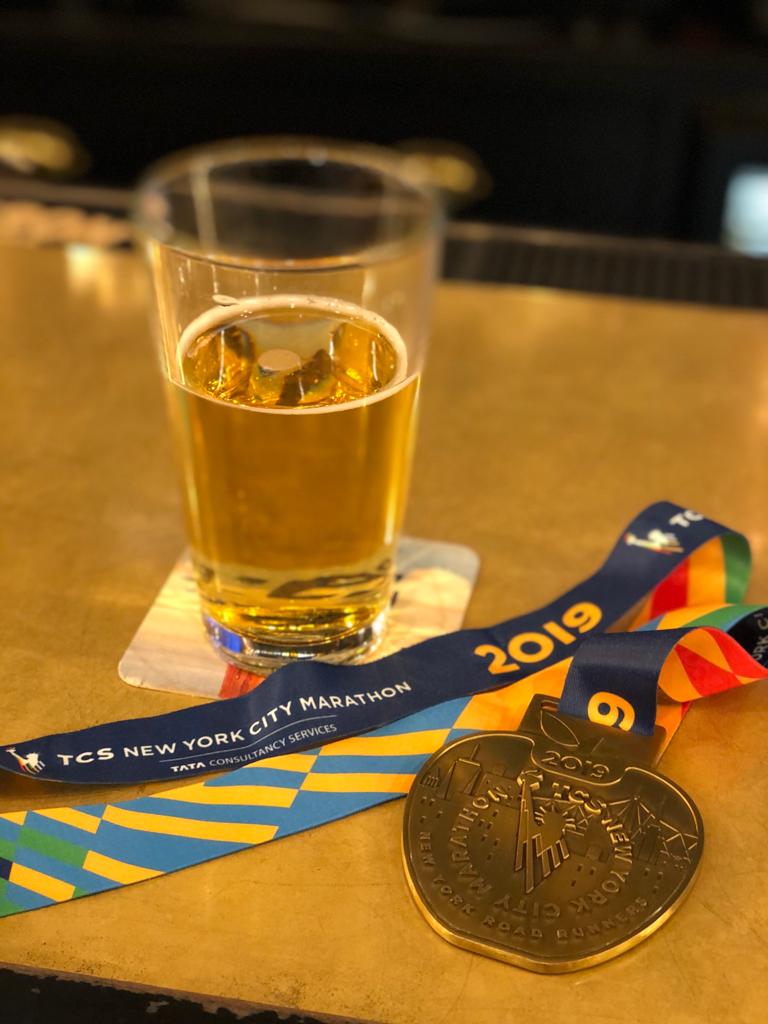 I'm still feeling the effects of the marathon, sadly. On my return home it was straight to A&E where they advised that I have soft tissue damage and I'm now receiving physio to try and assist this. The other issue I now have is that because this marathon - which was meant to be my one and only marathon - had such a wide range of emotions I'm going to have to do another when fit and well!

I'd like to thank everyone who has sent me well wishes, both pre and post marathon and to those who have kindly donated. I've raised an unbelievable amount which will make a huge difference to many less fortunate than ourselves.

Stuart has in fact raised more than £2100 for the PC Nicola Hughes Memorial Fund. This, along with the money raised by the other runners who took part in the marathon, will help several young people through university courses. You can give Stuart's total a boost by visiting his Virgin Money Giving page at https://uk.virginmoneygiving.com/StuartCowan2