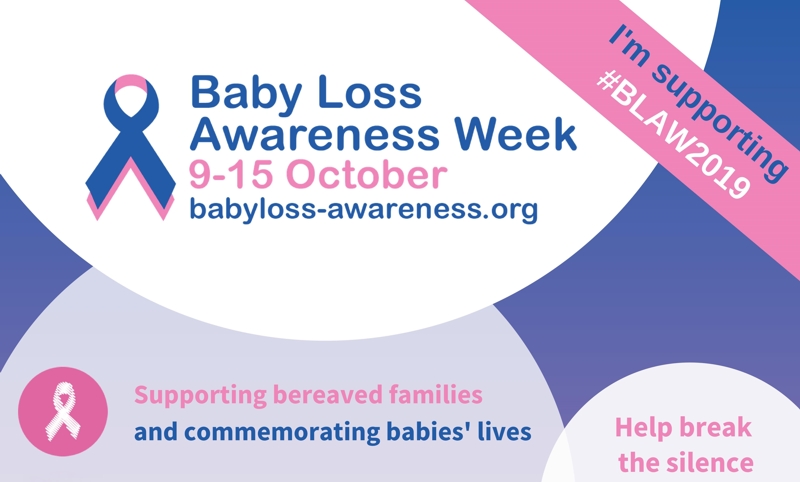 This week is Baby Loss Awareness Week, a campaign which aims to raise awareness about pregnancy and baby death.

We're supporting the campaign because it's important we not only signpost colleagues to the help that is available but play our part in encouraging an environment where we all listen to and look out for each other.

On Wednesday 11th April 2018 I went to the hospital with reduced movement. I expected to come home knowing everything was fine and that I had made a big fuss over nothing. Sadly, we were given the news that they could not find a heartbeat and we had lost our little girl at 32 weeks. I had gone to the hospital alone so had to phone my husband with the news and wait until he arrived.

I returned to the labour ward two days later to be induced. Our beautiful Ellie Grace was born asleep at 1601 hours on Friday 13th April 2018 weighing 3lbs 14oz. Under the care of a phenomenal midwife, we had the chance to dress Ellie, hold her, take photographs, read to her and spend as much time with her as we wanted before having to say goodbye.

When we came home two days later, I had to collect the death certificate, arrange a funeral and sign more paperwork for post-mortems and tests that I can remember. After a long wait we found out Ellie had suffered from something called an amniotic band that got wrapped round her cord. When I got home, I decided to fundraise for the hospital where Ellie was born. I think this was partly because I found I HAD to be doing something and partly because I couldn't let her story end without creating something positive. Also, maybe quite selfishly, it gave me an outlet for writing her story down and sharing it without having to repeat it over and over.

Over the next year we raised £6250 and were thrilled to see a maternity bereavement suite open on 31st August 2019. I also lost 3 stone and passed my driving test while I was on maternity leave. Ellie has helped is to achieve so much, even in her death and I am really proud of her legacy. People said I was brave but there were days I couldn't even get out of bed and may well have stayed there if it wasn't for the people around me. We could not have done this alone.

I returned to work in September 2018 and the support I had from my friends and colleagues at BTP to be phenomenal. My team and line managers kept in touch, but I was never under pressure to speak when I wasn't feeling great. Someone from HR liaised with my line manager about my maternity leave and I wasn't bothered by any of it. Supervisors and colleagues who had no responsibility for me whatsoever got in touch to show their support. The FPA have also been phenomenal as well as BTP Federation and I'm not even an officer.

I returned on phased hours until I was ready with support from my GP and occupational health. One thing I found was that I couldn't bear to sit at the same seat I had been in before, so I moved to a different desk which made coming back less difficult.

I was thrilled to find out I was pregnant again in March 2019. Unfortunately, this ended in a miscarriage at 9 weeks. I had to undergo surgical management and couldn't believe that this had happened to us again. I was off for four weeks until they could confirm the surgery had worked. One thing that has shocked me is the number of colleagues who had been through similar things but never spoken about them. Some had never told anyone at all. I had worked beside these people for as long as 12 years and they didn't feel able to speak about their loss because they were afraid of other people's reaction.

Baby loss is real. It shouldn't be a part of life but it is and pretending it doesn't happen won't make it go away. This is why I felt it was so important to share the resources and support available. You don't have to shout your story from the rooftops but you should never feel ashamed of it. Everyone is different so if I could give you one piece of advice, it is that whatever you feel or however you deal with things it is perfectly OK. And finally, that you are never alone.

If you're affected by the issues Lucy raises, there is support available via supervisors, OHU and staff associations. You can also visit the Health and Wellbeing area of the intranet or www.babyloss-awareness.org